As part of the Unified Community Platform project, your wiki will be migrated to the new platform in the next few weeks. Read more here.

From The Exiled Wiki
Jump to: navigation, search

Combat in The Exiled is based around skills and skill-combinations. Depending on what weapon and armor you are wearing, you can choose a total of 10 different skills for your character build to play with. Skills can be looted in the Open World and then learned at the Dojo. Here you can also change your assigned weapon and armor as well as your current skill build. 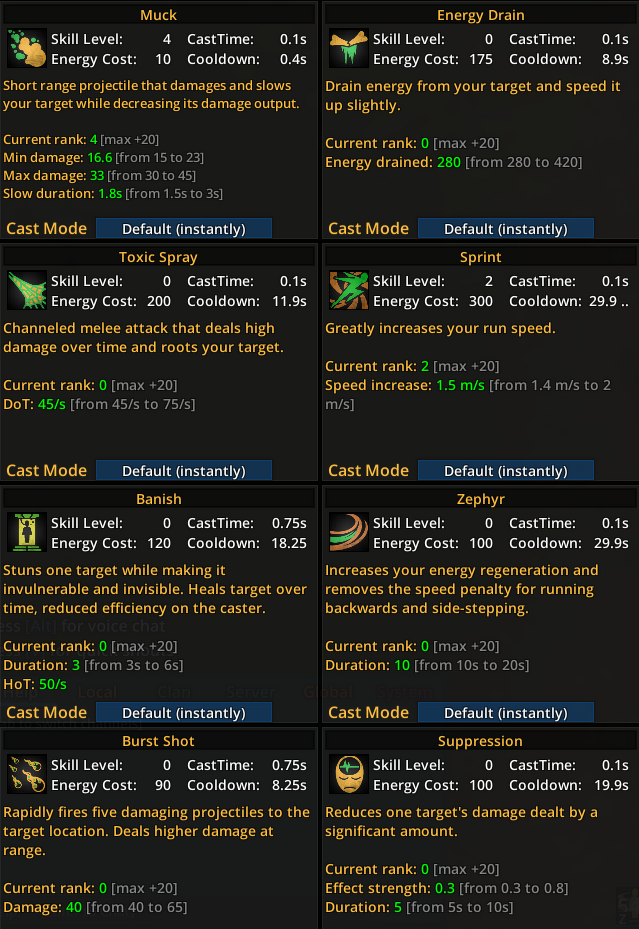 All skills are cast via hotkeys and aimed with the mouse. All skills in The Exiled are variations of "skill shots", meaning that instead of locking on to a target, a skill's projectile or hit area will always follow your mouse. In order to successfully hit a target, make sure to always correctly aim at it!

In addition to having to aim manually, every skill can hit every target on the screen: heal skills can hit enemies, damage skills can hit allies - including yourself! There are a few exceptions, however, because some skills can not be cast on yourself.

Since in the heat of battle, targeting yourself for a heal can be tricky, you can lock on to yourself with the "Target Self"-Button(default: [left shift]).

Patch 0.43 introduced different cast modes that help with targeting skills correctly. They can be changed in the Skills Overview (default: [K]), where you can also assign a global default value.

The different casting modes are:

All skills share similar properties that influence how a skill works both during and after casting it. Some of these are influenced by your character's Attributes and they can be found on the top of the skill's description.

The Skill Level refers to the amount of pigments spent on this particular skill. A skill's Scaling Properties are influenced by this.

Energy is the base resource of a character and determines whether or not you can actually cast any chosen skill. Energy equal to the amount of Energy Cost will be removed upon casting a skill, independent of its success.

The Cooldown determines how long it takes for a skill to recharge, allowing you to cast it again. This is modified by your character's Cooldown Speed.

In addition to the standard properties, most skills have more specific properties that get better with every skill level. These are listed below the skill's description.

See the Progression page for a detailed description on how to upgrade and learn new skills.

Skill builds refer to your character's combination of weapon, armor and your chosen skills. You can pick up to 10 skills from your chosen gear, however this number is restricted in the early levels. Also restricted is the amount of armor and weapon skills you can choose: Starting with 3 each, later on you will be able to use heavily-specialized builds that rely on more weapon than armor abilities and vice versa.

Completed skill build with a mixture of Bow and Leather skills.

Every character in The Exiled has three general abilities: